Have your say on a ‘People’s Food Policy’: A Workshop led by Linda Kaucher, 20 March 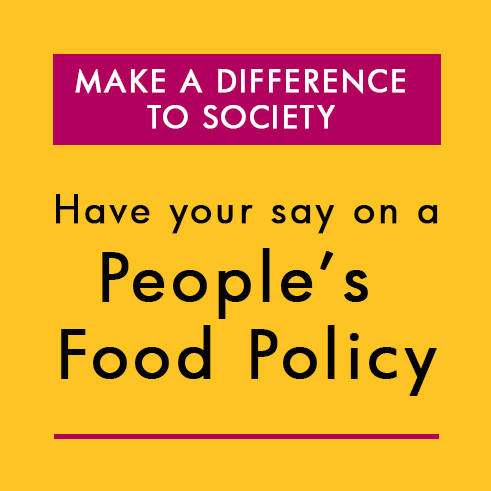 ‘Never doubt that a small group of thoughtful, committed citizens can change the world; indeed, it’s the only thing that ever has.’

In partnership with the Food Sovereignty Movement, we invite you to participate in drafting a People’s Food Policy.

Food is immensely important in our lives – we need it, after all, to live. But the networks that produce, deliver, package, and sell food are also an integral part of all the social, political, and economic systems that govern nations and world economies.

Do we have the food system we want? Does it operate in the best interests of consumers but also in those of producers and of the environment? Is it sustainable?

At a Food Sovereignty Gathering in Hebden Bridge in October 2015, the formulation of a ‘People’s Food Policy’ was proposed. The goal is to design a food policy based on the fundamental principles of food sovereignty. In a time when there is a tremendous push for EU access for GM and biotech food corporations, including in relation to the Transatlantic Trade and Investment Partnership (TTIP) between the EU and US, an already-prepared People’s Food Policy could be very useful reference point.

A process to formulate such a policy is currently underway with consultative workshops across the UK involving different sectors and communities. Via these two-hour workshops and following a common framework, people’s input can be combined to produce a genuine grassroots policy working towards the same vision of creating a fairer and more sustainable food system.

Find out more about the origins of food sovereignty and the some of the groups that are part of the international movement.

Linda Kaucher has 15 years experience of researching the EU’s so-called ‘trade’ agreements, of which TTIP (US/EU Transatlantic Trade and Investment Partnership  is now the main focus. She works to expose and oppose the EU’s secretive ‘trade’ agenda. Linda is also a member of StopTTIPuk,  part of a Europe-wide campaign run by a coalition of over 500 European organizations that currently has over 3 million signatures supporting its campaign.