Perspectives: In Conversation with Gregory Sams on the Sun of God 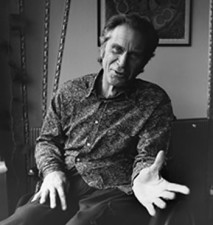 A remarkable opportunity to be in conversation with author, publisher, fractal artist and natural food pioneer Gregory Sams to discuss his book, Sun of God: Discover the Self-Organizing Consciousness that Underlies Everything.

I was both excited and moved by this remarkable book.”
Colin Wilson, The Outsider

“…will have a part to play in the global change of consciousness that is now, as never before, so desperately needed. Wonderful, clear-headed, thought-provoking material.”
Graham Hancock, Fingerprints of the Gods, Supernatural, Ancient Teachers…

Join us for what will  be a wide-ranging conversation about the universe and our role in it. Gregory Sams book explores the multiple issues around the idea of a living universe and brings some new thinking that aims to integrate spirituality with science. The implications of this thinking is startling, and aims to reveal a universe incorporating both intelligence and design without need of an Intelligent Designer.

About the Sun of God

What if our Sun is not an accidental light bulb in the sky that just happens to radiate the light of life and hold a family of planets together? What if stars are not simply random balls of plasma reacting to nothing more than the laws of physics? What if the pagans were right and the church wrong about the divine nature of our local star? Perhaps our human race is but a bright spark of existence in a connected living Universe.

It was not science that burned all thought of a living Sun out of our culture but a jealous Church. Scientists maintain this religious taboo out of habit and not the scientific method. Yet as cosmologist Carl Sagan put it, “Our ancestors worshiped the Sun, and they were far from foolish…. If we must worship a power greater than ourselves, does it not make sense to revere the Sun and stars?”

For those who would tick the “spiritual but not religious” box, Sun of gOd provides easy-to-digest and thought-provoking insights into what it’s all about.

“Simply one of the wisest, most lucid, and most thoughtfully written books that I’ve ever encountered integrating spirituality with science and other disciplines”
Resurgence magazine review, by David Jay Brown

“… one of those most rare books, an unpretentious book of wisdom.”
John Allen, Chairman, Global Ecotechnics, Originator of the Biosphere 2 Project

“Your book is a masterpiece!”
Youth, Killing Joke, Butterfly Studios

“Sun of gOd is wise, persuasively reasoned, and thoughtfully written–not light reading, but rich, provocative, and worth savoring, like a fine meal. By the time we finish, Sams has served up a feast, moving fluidly between the micro and the macro, exploring self-organizing principles within the cosmos with resounding logic and common sense, and making great contributions to the global shift in consciousness”
New Consciousness Review

“Sun of gOd presents a perfectly outrageous hypothesis: The sun is a conscious, living organism residing in a thriving galactic community, thinking stellar thoughts that span the entire universe. Surely this is nonsense. Except that the more you read the more a conscious universe begins to make sense. Gregory Sams’ book is a clearly written and persuasively reasoned argument to think about the sun in a radically new and refreshing way.”
Dean Radin, PhD, Senior Scientist, Institute of Noetic Sciences

Gregory Sams has established himself as a pioneer thinker and actor in the fields of food, fractals and science. From 1967, Gregory was pioneering natural foods in the UK, in partnership with his brother Craig. He opened Seed macrobiotic restaurant in Paddington at the age of 19, Ceres grain store in the Portobello Road soon after, then Harmony Foods (now Whole Earth Foods) in 1970, as well as being closely involved with Harmony magazine and Seed, the Journal of Organic Living. He conceived, created and launched the original VegeBurger in 1982, adding a new word to the language as he opened up the market for vegetarian foods.

In 1990 Greg moved out of food and into fractals, founding Strange Attractions – the world’s only shop ever dedicated to chaos theory. Trading as chaOs worKs, he went on to produce and license fractal images worldwide on everything from posters to book covers to fashion fabrics. His interest in chaos theory, however, was not just for the sexy psychedelic images, but for the social lessons inherent in our discovery of self-organizing systems throughout the natural world.

This led him to write and publish, in 1998, his first book, Uncommon Sense – the State is Out of Date. It was well received and, enjoying his role as an author, Gregory spent the first seven years of the new millennium writing Sun of gOd, Discover the Self-Organizing Consiousness that Underlies Everthing in which, as he puts it, the biggest elephant-in-the-room that you could ever imagine is unveiled. During 2013 he upgraded his first book, republished in 2014 and retitled The State Is Out of Date – We Can Do It Better. More words, audio, and video of/from/with Gregory can be found online.