Home features aerial footage from fifty-four countries, showcasing beautiful scenes that are intended to highlight how closely the earth’s ecological problems and challenges are interconnected. In showing us scenes most of us have never seen, Artus-Bertrand shares with us his sense of awe about our planet and his concern for its condition. 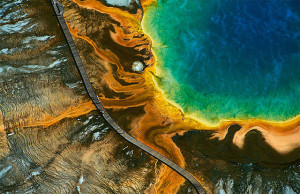 “In the past 200,000 years, humans have upset the balance of planet Earth, a balance established by nearly four billion years of evolution. We must act now. It is too late to be a pessimist. The price is too high. Humanity has little time to reverse the trend and change its patterns of consumption.“

Home was the first environmental film to have been made using aerial-only footage, and was Arthus-Bertrand’s feature film directorial debut. The movie itself is carbon offset: all of the CO2 emissions resulting from the production of the film were calculated and are offset by sums of money that are used to provide clean energy to those who do not have any. For the last ten years, all of Artus-Bertrand’s work has been carbon offset.

The film itself has been seen over 15 million times and is available for free on YouTube – it has been translated into over 40 languages and shown in over 130 countries. The film also won the International Roberto Rossellini Film Award in 2010, and some of the footage featured in Terrence Malick’s 2011 film The Tree of Life.

To find out more about Home, visit the film’s website here, and check out its accompanying educational materials here.

“…quite simply, awesome viewing [and] gracefully narrated by Glenn Close… When the credits start rolling, you come away with these fantastic images floating around in your head, reminding you of how beautiful this planet actually is. What’s more, you want to do your bit to save it. At least, that is the hope.” – The Ecologist

“The fragile scenes of Home visually portray just how much the little things we do add up to affect the whole world – “the ecosystem has no borders” is a mantra from the film. What’s important is not what’s gone, but what remains.” – Earth Window Power