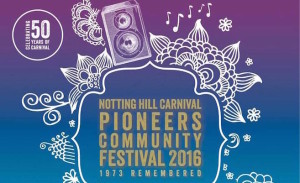 A week of local history talks to Celebrate Carnival 2017 and to mark the vibrant communities of Notting Dale, Notting Hill and Ladbroke Grove over the last 100 years.

Carnival Pioneers 2016 film screening presented by Leslie Palmer. Leslie is a Trinidadian community activist, writer and teacher, who migrated in the 1960s to the UK, where he became involved in music and the arts in West London. Leslie Palmer’s decisions as the director of Notting Hill Carnival from 1973-1975 played a key part in shaping the carnival into its modern form. To market the festival to a wider audience, he made a controversial decision to invite local Jamaican sound systems and black music bands to play at the festival. By the time Palmer left carnival in late 1975, the event was attracting more than 500,000 people.

Palmer also encouraged traditional masquerade, and 1973 was the first time costume bands and steel bands from the various islands took part in the street parade. The following year stewarding and stalls were introduced, and first Radio London then Capital Radio began broadcasting from the event.