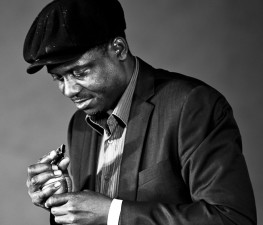 One of Charlie Gillett’s best live bands in the UK

“This gifted bluesman is one of London’s greatest undiscovered talents. His voice has a warm unforced timbre that perfectly complements the rasp and wail of his mercurial harmonica playing.”
The Independent

Errol Linton is no stranger to Book and Kitchen, so it with great pleasure that we welcome him as a resident artist at Book and Kitchen. He will be bringing back his blues, boogie and Caribbean swing vibe to Notting Hill Unplugged.

A harmonica player and vocalist Errol was first introduced to John Walters by a chance encounter, when Errol was busking in the Underground stations. Meeting Walters led to a radio session on the Andy Kershaw show and in 1993 was featured alongside Big Bill Broonzy in BBC 2’S Arena documentary ‘Two Generations of the Blues’, and his two albums have become British blues milestones

In the words of the late John Walters “Errol is as good a Harmonica player as anyone can reasonably hope to become, he is the real Deal.”

Errol will be accompanied by  Adam Blake on guitar, Petar Zivkovic on piano and Lance Rose on double bass.

The evening will be filled with Errol’s voice and harmonica in the comfort of our cafe with food and drink available.