People & Politics: A History of Drugs in Warfare – Lukasz Kamienski on Shooting Up

‘In this profound, troubling, and deeply informative book, Kamienski investigates the relationship between intoxicants and warfare.’ — Foreign Affairs 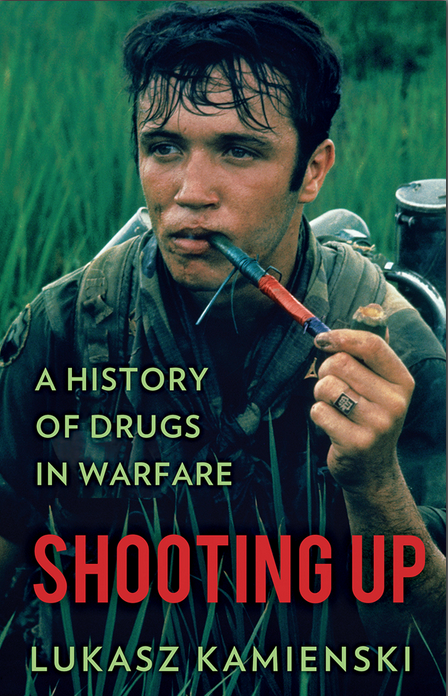 Shooting Up is an original and comprehensive history of the relationship between fighting men and intoxicants, from Antiquity through to the present day. Lukasz Kamienski explores why and how drugs have been issued to soldiers to increase their battlefield performance, boost their courage and alleviate stress and fear — as well as for medical purposes. He also delves into the history of psychoactive substances that combatants ‘self-prescribe’, most notoriously taken by GIs in the Vietnam War, but also as far back as the Vikings.

From hallucinogenic mushrooms to LSD, from opium to opioids, from coca to cocaine, from amphetamines to ecstasy; from Homeric warriors to the first Gulf War, from the Assassins to today’s global insurgents — Kamienski tells how drugs have sustained warriors in the field and how they will determine the wars of the future in unforeseen and remarkable ways. Also discussed is how intoxicants have been used as weapons of warfare, either as a feasible non-lethal psychochemical weapon or as a means of subversion.

e study concludes by delving into the risks of intoxication for fighting power, military discipline and veterans’ lives.

Lukasz Kamienski is Associate Professor at the Faculty of International and Political Studies, Jagiellonian University, Krakow.

‘Absorbing and comprehensive’ — The Intercept

‘This in-depth analysis of the “highs” of war tells a largely untold story — of the role drugs played over the centuries in supporting troops on the battlefield, and the role they will play in future in driving the course of war. Kamienski’s book will undoubtedly come to be regarded as a classic text.’ — Christopher Coker, Professor of International Relations, London School of Economics

‘Traditional military histories make only passing references to soldiers’ use of alcohol and various drugs. Lukasz Kamienski, however, provides us with a very non-traditional and fascinating overview of the panoply of drug use in wartime. From providing “Dutch courage” to soldiers, to actually serving as a casus belli, drugs have shaped the very nature of war itself. Shooting Up highlights the pervasiveness of drug use in war, giving us an entirely new perspective on this important dimension of the human, operational and diplomatic history of combat.’ — James J. Wirtz, Naval Postgraduate School, Monterey, California

‘In Shooting Up, Lukasz Kamienski provides a diligent examination, keen view, and detailed discussion of the implications of the long standing, and often controversial use of drugs in military operations. Shooting Up is a most interesting read that makes an excellent contribution to the literature.’ — James Giordano, Department of Neurology, Georgetown University Medical Center, Washington, DC, USA