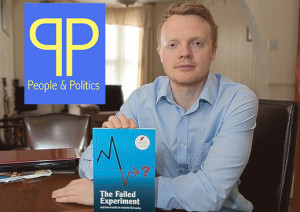 How can we build an economy that works?

This event is part of Season 2 of our People and Politics series, which will be focusing on the theme of Tribes Divided: How to Bridge the Gap. We are living in an increasingly polarised world, and this series aims to investigate how these divisions arise and how we can bridge those gaps. This follows on from Season 1, which looked at Democracy in the 21st Century.

Andrew Fisher, Labour party member and policy adviser to Jeremy Corbyn, is also the author of The Failed Experiment: and how to build an economy that works (2014). The Failed Experiment critically examines how our economic and political systems have developed over the last 35 years, and how they have come to benefit corporate interests over those of the people the government is meant to serve. Fisher argues that it is politicians, not bankers, that must take most of the blame for 2008 financial collapse, and that the credit crunch exposed the frailties of a failed economic experiment.

After receiving his MA in politics, Andrew Fisher spent six years as a parliamentary researcher. He is now the policy officer for a major trade union. In 2006 he co-founded the influential Left Economics Advisory Panel. He lives in south London with his wife and young son. His writes a blog on the LEAP Economics website.

Questions we will ask Andrew:

Over the last 35 years, how has the government ceded power to a new oligarchy? What were some key events during these 35 years? Who or what constitutes this new oligarchy? How do we break their power in order to create a new economic framework?

Reviews of The Failed Experiment:

“This book makes it clear that fixing our economy requires political solutions. The result is a lucid and compelling manifesto for change.” Aditya Chakrabortty, Senior Economics Commentator, The Guardian

“This is the best thing I have read in years. It will be readily used by campaigners as a basic handbook to explain our recent history.” John McDonnell, Labour MP for Hayes & Harlington

“A crucial detail expose of neoliberal dogma, crammed with fact and detail.” Owen Jones, journalist, broadcaster and author of “Chavs: the demonisation of the working class”

“A compelling account of all that’s wrong with the British economy – and what’s needed to put it right. Great analysis, strong politics, and an inspiring call to arms.” John Hilary, Executive Director of War on Want and author of “The Poverty of Capitalism”

“Offers a solid factual account of the extent of the dramatic redistribution of power and wealth away from ordinary people and into the hands of such a small elite of the mega-rich. The book convincingly argues for the urgent need for a fundamental democratisation of the economy, and recognises this will require a re-intensification of popular struggles.” Red Pepper

Join us for a captivating discussion that looks at why we have failed to create an economy that provides for all, and how we can work towards creating an economy that truly works.