The London Magazine presents an evening of drinks and poetry.

There will be poetry readings by several of our contributors, including: Oxford-based poet and translator, Theophilus Kwek (winner of the Jane Martin Prize in 2015 and the New Poets’ Prize in 2016), Angela Kirby (BBC’s Wildlife Poet of the Year, published by Shoestring Press), Irish poet Róisín Tierney (Dream Endings (Rack Press) won the 2012 Michael Marks Pamphlet Award) and former Minister of the Arts and Special Editorial Advisor to The London Magazine, Grey Gowrie. 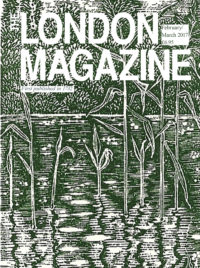 with a history stretching back to 1732. Today – reinvigorated for a new century – the Magazine’s essence remains unchanged: it is a home for the best writing, and an indispensable feature on the British literary landscape.

Across a long life – spanning several incarnations – the pages of the Magazine have played host to a wide range of canonical writers, from Percy Bysshe Shelley, William Hazlitt and John Keats in the 18th-century, to T.S. Eliot, W.H. Auden and Evelyn Waugh in the early 20th-century. Meanwhile, in recent decades the Magazine has published work by giants of contemporary fiction and poetry such as William Boyd, Nadine Gordimer, and Derek Walcott.